Why another kymograph ImageJ plugin?

Posted under ImageJ, Science, Software on September 11th, 2014 by katpyxa

Kymograph is a useful tool to transform a movie containing particles movement into a single picture/figure. It is convenient when analyzing vesicles movement in cells, axons/dendrites of neurons, cars movement on roads. It shows particles’ speed, direction, intensity, etc.  What it does is just plotting how intensity is changing over time along some line or curve. Ideally software that makes kymograph should provide following options:

Option number 3 is quite useful in applications, since it allows to highlight moving particles that are usually bright (see last picture below).

There are multiple choices of how one can generate kymograph from a movie using ImageJ/FIJI (being quite popular free scientific image analysis software), but there is no possibility to fulfill all four point in the list above.

One option is to use the native Reslice option of ImageJ (it is described here).  But the line can be only 1 pixel wide, so above points 2)-3) are not fulfilled.

Most often used alternative is great (free, open source and very well documented) MultipleKymograph plugin originally developed in EMBL. It is a very nice plugin, handling curves of different width.  And second thing is that there is a minor bug in the way the width of the line/curve is handled. To describe it, here is a drawing: 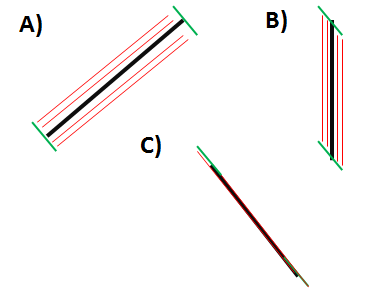 If you draw a line (thick black line in A) of some width (represented by thin red lines), the scan along the line always happens in the direction of 135 (=90+45) degrees with respect to the current movie/picture orientation (green and red lines). It is fine if the line is under 45 degrees (like in A), but if your line is at 90 degrees (like in B) or even 135 (case C), than the effective scanning width would be less. That can lead to some artifacts. But it is a great plugin and actually, you can overcome this issue by just flipping your movie horizontally, in case you see that the overall direction of the line is close to 135 degrees.

Update: The third option is updated version of MultipleKymograph plugin, which can handle kymographs of various width and average, maximum, minimum or sum of intensity with straight or polylines. Also the 135 degree artifact is fixed there, so it is a great and ready to use tool!

We decided to make KymoResliceWide plugin for ImageJ, to handle these four requirements. Here are example kymos of vesicles moving along the axon of neuron made using different methods for comparison : 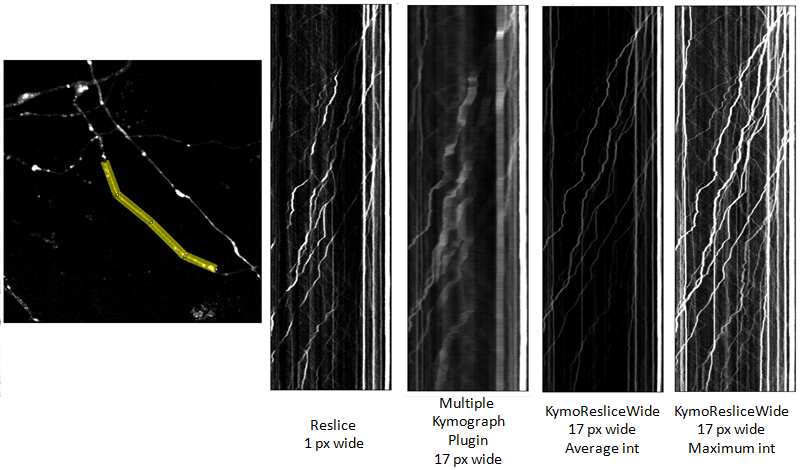 Also you can add line ROI to the overlay of original picture to mark an area which was already analyzed.

So well, this is why another kymo plugin with source code available.

Upd: Thanks to Dr. Arne Seitz reply, there is the newer version of MultipleKymograph plugin that I didn’t know about which generates kymos with average, maximum, minimum and sum intensity and lacks ‘135 degrees’ artifact.